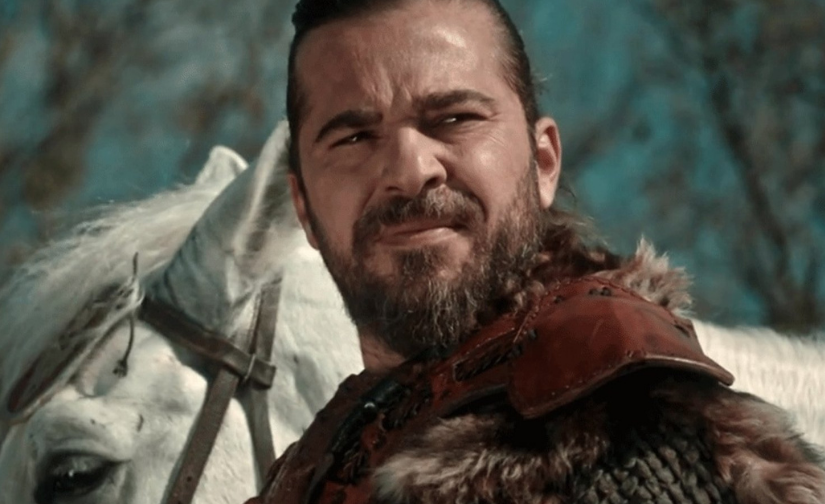 As the Pakistan Day Parade celebrating the passage of the historic Pakistan Resolution kicked off in full fervor on March 25 in Islamabad (delayed two days by uncooperative weather), some viewers were taken aback by a familiar tune. Amidst a sea of green and white flags and Pakistani nationalism on full display, a Turkish band paid tribute to Muslim hero Ertuğrul, Ghazi and the Turkish drama based on the life and times of Ertuğrul, the father of Osman who founded the Ottoman Empire.

An odd mix right? We thought so too. However, a deeper look at the dominion of Turkish dramas and celebrities among Pakistani viewers suggests that the tribute might be strange but not surprising. Turkish dramas are second only to American ones in terms of global distribution and Turkish is now the most-watched foreign language in the world, beating out French, Spanish and Mandarin.

Pakistan is one of the largest markets for Turkish dramas – also referred to as Turkish dizis, which have covered everything from gang rape to calculating Ottoman royals. Series like Diriliş: Ertuğrul, Mera Sultan and Ishq-e-Mamnoon have enjoyed massive viewerships – Ishq-e-Mamnoon finale was watched by over 55 million people in Pakistan and Pakistan makes up 25 percent of Ertuğrul’s global audience on YouTube. In 2013, Pakistani TV channels screened 11 Turkish-made TV series and two movies, with 34,000 tourists flocking to Turkey the same year. The number was estimated to exceed a whooping 120,000 by the end of 2020, according to a report by Turkish state-run Anadolu Agency.

In her book “New Kings of the World,” writer Fatima Bhutto explains that Turkish shows initially found a footing in the Pakistani market due to their cheaper procurement costs compared to original Pakistani programming – an episode could be procured for between $2500-$4000, a stark contrast compared to a local show which costs more than $10,000 to produce. But soon enough the voracious storylines and light-eyed cast members had Pakistani audiences hooked.

The hype was only fueled further when Pakistani premier Imran Khan directed that Turkish dramas be dubbed in Urdu and aired on state-run Pakistani television. In an interview with local broadcaster Hum News, Khan said the airing of quality content like Turkish dramas was an attempt to educate and provide good role models to the country’s people, especially the youth.

But why exactly are Pakistanis so enamored by Turkish plots, production and characters? The answers may lurk deeper than fancy production designs, elaborate costumes and dramatic plotlines.

Pakistan and Turkey have long held each other in high regard and referred to each other as “brother countries.” Turkey was one of the first countries to recognize Pakistan after its founding in 1947 and supported its membership in the United Nations. Prior to Pakistan’s independence, Muslims of the British Raj also clubbed together under the Khilafat Movement of 1919-1922 in support of the dwindling Ottoman Empire. The Caliphate signified global Muslim unity. Even though the movement collapsed after Mustafa Kemal Ataturk dismissed Mehmed VI, the last sultan, Indian Muslims continued to send financial support to the empire as it was on its way out.

Fast forward a few decades and Pakistan finds itself forging news allies while Asia goes through a massive geo-political shift with Saudi Arabia at odds with Iran, a hyper-nationalistic Narendra Modi in power in India and China’s rising global power. In this new reality, Pakistan appears to have found comfort in Turkey’s cultural values and a more modern brand of Islam.

Since coming to power after a disputed election in 2018, Khan has said he wants “to create a Pakistan which is in line with the first Muslim society created by the Prophet Muhammad in Medina,” the holy city in Saudi Arabia where Islam emerged in the seventh century.

Khan has found a partner in Turkey’s Erdogan, who has attempted to impose Islamic values in the secular country. Since Khan came to power, there has been a clear uptick in high-level visits, military exchanges and exercises, purchase of defence equipment and political support for each other’s disputes with neighbouring countries between the two nations. Turkey has also expressed clear support for Pakistan when it comes to the Kashmir dispute with Erdogan comparing the struggle of Kashmiris to the Ottoman Empire’s fight against Allied powers during World War I.

However, Pakistan’s economic dependence on Saudi Arabia often places it at odds with the visions of Islamic grandiose that Turkey promises. Relations between Riyadh and Ankara have historically been tense over issues like the support of the Muslim Brotherhood rule in Egypt and differences over approach in Libya and Qatar. The relationship reached its lowest point after the brutal murder of journalist Jamal Khashoggi at the Saudi Consulate in Istanbul in October, 2018. Pakistan’s Khan was the first world leader to welcome Saudi Arabia’s crown prince, Mohammed bin Salman, after Khashoggi’s heinous killing—a crime that Erdogan helped bring to light despite repeated denials and cover-ups from Saudi officials.

Since its inception, Pakistanis have struggled with what it means to be Pakistani. Heroes and idols have mostly been cultural imports ranging from the Khans of Bollywood, the blue-eyed denim-clad heroes of Hollywood and now historical Turkish figures. Pervez Hoodbhoy, a professor at Forman Christian College-University in Lahore, says Pakistan has a “cultural vacuum coupled with incomplete identity formation.” “We first tried to become Arabs by taking inspiration from Arab heroes,” Hoodbhoy told Radio Free Europe/Radio Liberty. “But now that the Arabs have slightly moved towards liberalism, we are pinning our hopes on Turkey.” For the middle class, the conservative values, sword-bashing men defending Islam against its enemies and modestly covered women also offers a cultural narrative thats closer to home and hence easier to buy into.

Bhutto explains this further in her book highlighting that the Turks had managed to strike a nerve where Indian, American and Pakistani content failed. “They had achieved the perfect balance between secular modernity and middle-class conservatism,” she says.

In September 2019, leaders from Pakistan, Turkey and Malaysia decided to jointly launch an English language television channel dedicated to confronting Islamophobia and removing “misperceptions” about Islam. The TV channel, which will be broadcasting in English, will create videos for social media platforms, produce documentaries and video news, according to reports. Additionally, Khan is also mulling over a proposed joint TV series with leading Turkish director Kemal Tekden dubbed Turk Lala. The series will highlight the role played by Muslims of the sub-continent during the Balkan War.

In addition, Pakistan had also announced plans to celebrate the centenary of the Caliphate movement of the 1920s in 2020. Earlier this year, Turkish foreign Minister Mevlüt Çavuşoğlu also inaugurated the Turkish consulate under construction in Karachi, which is reported to be one of Turkey’s largest consulates in the world.

The two countries also enjoy a strong military-to-military relationship, which is symbolized by the armed forces training exchange programme of 2000. Since the inception of the programme, approximately 1,500 Pakistani military officers have been trained in Turkey. Turkey also helps maintain Pakistan’s fleet of F-16 aircraft.

A group of teenagers between the ages of 15 and 26 also attempted to recreate the popular Turkish series in the Odigram village of Swat Valley. The young boys financed the film with the income from their business selling axes, swords, jackets, and borks, which they produced after watching the serial ‘Resurrection Ertugrul’, according to a Global Village Space report. The film will be released after Eid-ul-Fitr with the title, Pakistani Ertugrul, on YouTube.

While the bond between Islamabad and Riyadh is cemented by historical ties, common adversaries and a shared foreign policy vision, it would be interesting to note how the relationship is furthered beyond Khan’s government. Moreover, the strengthening ties between the two countries should also provide a new template for Western and US policy makers who have  historically viewed Pakistan solely through an Afghan/Iran security lens and defined Turkey by the ongoing refugee crisis and Syria and Russia’s military influence. Until then, will our TV screens continue to be flooded by Turkish cultural imagery? The answer seems to be a likely yes.

You can also read previous newsletter coverage of Turkish media in Pakistan here:

Sarah Munir is a digital journalist with a focus on the intersection of technology and media. She has worked with several publications including Dawn, Facebook, Forbes, and most recently Twitter. You can reach her @SarahMunir1.