Op-ed writer: Ushah Kazi is a Pakistani culture buff and writer based in Canada. She has written for a number of Pakistani and Canadian publications. She has also published a book about Pakistani cinema titled, The Pop-Culture Junkie’s Guide to Pakistani Cinema, which is available on Amazon.

A graduate of the Rhode Island School of Design, Nashra has found her creative niche by designing experimental and playfully political board games. No stranger to controversy, Nashra has in the past turned both Pakistan’s panache for arranged marriages, and the country’s political landscape into entertaining spectacles. In the wake of rising tensions, Nashra once again wanted to use her craft, while at the same time appreciating the sensitivity of the situation.

In a bid to represent this struggle, Nashra paired up with an Indian volunteer named Akansha Gupta, and staged a demonstration outside the consulates. Titled ‘disconnected’, it offered a creative expression for anyone on either side, who longs for peace. Both women wore red, showing their solidarity with Kashmir, and were connected in some way, for the duration of the process. They held hands, had their backs against each other, or were linked by a string. In their hands, they held flags of both India and Pakistan, fashioned into peace signs, to encourage, “an end to the brutality, and future conversations of reasonable peace.” 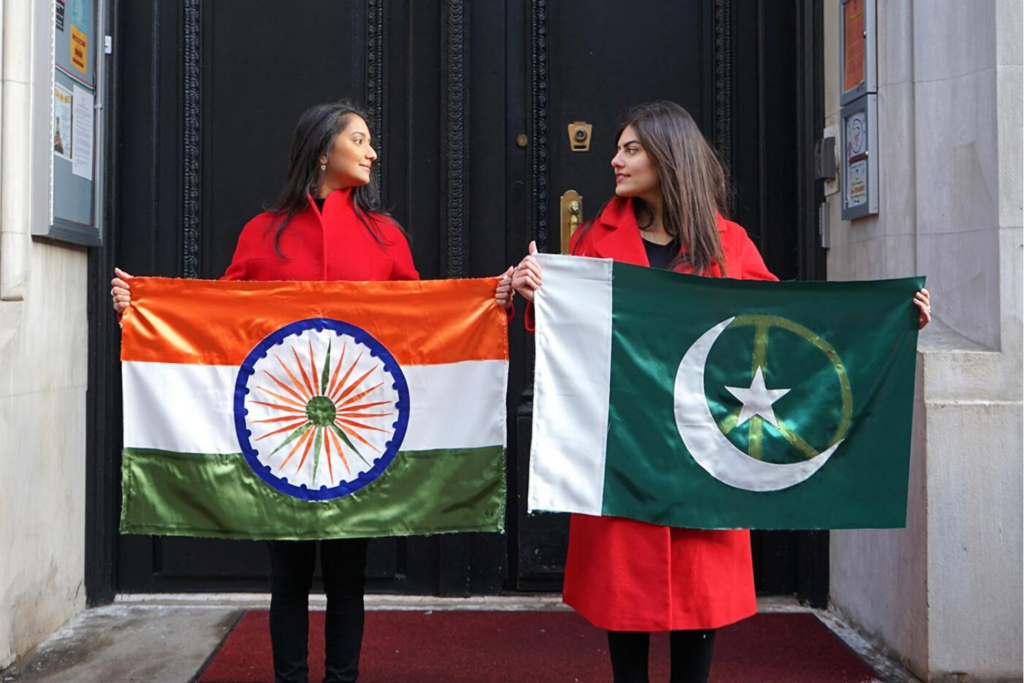 Despite her artistic vision, Nashra, like most young Pakistani’s witnessing the worsening situation, is not oblivious to its severity. She is particularly frustrated about the political circles that have turned their backs on discourse and diplomacy. “On the governmental level,” she says, “…I think there’s a lot more work that needs to be done. I think Imran Khan has made great moves towards this, but with the current Indian government, it seems unlikely in the near future.” A sentiment that, sadly, has been echoed by many. Regardless of the grim reality, which we all have to accept, an artist also has the capacity to encourage hope. And, Nashra hopes to continue doing this.

She is currently working on a game that will take inspiration from shared Pakistani and Indian pop-culture, and encourage camaraderie. As the young designer explains it, “this board game will allow players from both countries to come together, play, and laugh at the things they hold nearest and dearest to their hearts.” Apart from this, she is also planning to launch a non-profit organization called, ‘Make Chai Not War’, the proceeds for which will go towards relief efforts in Kashmir. In her own way, this vibrant young talent wants to encourage peaceful dialogue, as a means to move forward. And, if all of us take just one thing from her, it has to be the resolution to push forward.

When times are as grim as this, it is tempting to forsake hope itself. But, we owe it to those worst impacted by the tensions, and to our own humanity, to hold on to the promise of better days.